How to Prevent Roller Cam Walk

Why Use Roller Tappets?

The advantage in using roller tappets is that they take in stride every engine condition from slow speed idling, through intermediate to extreme high speed operation. The first V-8 roller tappet camshafts were tedious to install requiring the block to be drilled for bolt-in guide plates. Later, when Isky patented the first self-guided roller tappets in 1958, the roller camshaft became a simple slip-in installation.

As roller cams became more popular and racers removed their flat lifter camshafts in favor of the roller cams, some racers experienced cam walk (either forward or backward cam movement in the block) along with erratic distributor timing. The tell-tale signs are a worn thrust face on the block (if movement was backward) or a scored timing chain cover (if movement was forward), or excessive wear of the cam's distributor drive gear.

The Engine Block is Discovered To Be The Problem

At about this time Iskenderian was running Dynomometer Tests of flat versus roller cams on the new 327 cu. in. Chevy engine. After all scheduled flat lifter cams were tested, we began testing a series of roller grinds for power output. Much to our dismay the first roller cam tested showed a bad power loss. A check up showed the distributor timing had moved. Further inspection showed the cam had walked forward in the block, scoring the timing chain cover.

Ed Iskenderian immediately took interest in these problems and to isolate the cause, he removed the timing chain (disconnecting the cam from the crank) and removed all pushrods and rocker arms from the engine, leaving only the camshaft, rollers and rev kit springs (which pre-load the tappets to the camshaft.) With the cam now independent of the crankshaft, he revolved the cam with a speed handle wrench and socket on one of the cam sprocket bolts. 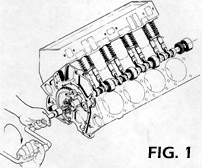 (Fig. 1) Turning in the normal running direction, after 20-30 turns, sure enough the camshaft had screwed itself out of the block approximately 1/8 inch. (Fig. 1A). 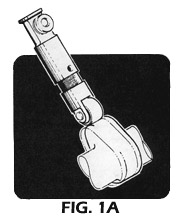 Then in curiosity, he reversed the turning direction and found the cam to walk backward. Now, where did the problem lie? In the cam assembly or the cylinder block? Isky's curiosity induced him to try this same cam and roller tappet combination in another spare block. When he did he found he could turn the cam in either direction indefinitely, without experiencing cam walk. This confirmed his suspicion that the first block had its tappet bosses bored out of square with the cam bearing bore, causing the roller tappets to thread the camshaft in or out, depending on the direction of rotation.

How can the tappet Bosses be "Out Of Square"?

Since Factory machining of the engine block is done in sequence at different stations, an engine block having just been line bored, next moves down to the tappet boss boring station and could easily be dislocated slightly, if any of its datum points were burred or if a metal chip lodged between the datum point and the fixture. While the angular error would probably only amount to a fraction of a degree, the roller followers can now no longer take a true path around the cam lobe. Instead, the followers now skid laterally during the rise and fall cycle. It is this lateral skid force that transfers to the camshaft and all 16 tappets can easily create several hundred lbs. of cam thrust force. (Fig. 2) 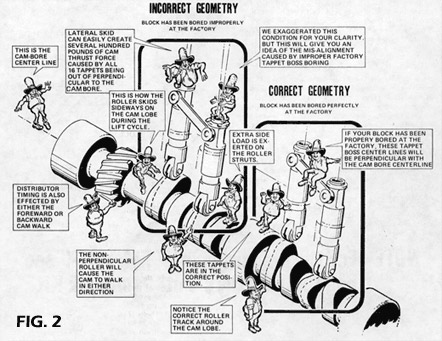