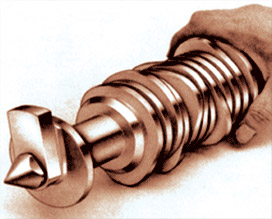 Cam design has come a long way since the old days of the simple harmonic design. This design deter-mined the cam shape by using three separate radii - the nose radius, the flank radius, and the base circle radius. Today, this simple method is considered primitive because of the difficulty encountered in accurate inspection, and its poor highspeed performance qualities. The simple harmonic has been replaced with a move exacting method of plotting the cam contour, the "polar coordinate" method. This method consists of computing the shape of the cam in1/10th-degree angular increments to the 5th decimal point (.00001) or the nearest 10 millionths of an inch.

The number of man-hours required to solve the countless mathematical equations necessary to produce the polar coordinate data of the cam contour was realized at lskenderian,and as a result, lskenderian pioneered the use of the electronic computer and the Polydyne formula in racing cam design. The data obtained from the computer under-goes scrutinous lift, velocity and acceleration curve study. The lift curve is a graphic chart showing the actual lifting motion applied to the tappet by the cam. The velocity curve is the first differential of the lift curve and shows the change in lift per degree of cam rotation.

Finally, the acceleration curve is the first differential of the velocity curve and indicates the change in the rate of change of lift per degree of cam rotation. It is this acceleration curve that most demandingly dictates the success of a racing camshaft. The cam contour, having been propearly determined, is now ready for transposing from the blueprint to the master cam. The master cam is a solid piece of Swedish tool steel,containing the exact lobe configuration and angular displacement of the cam lobes of the product camshaft and is the heart of the cam grinding machine. It is this master that controls the shape of camshaft as it is ground by the grinding wheel.

Rigid quality control in any industry is the secret to success. At ISKY Racing Cams, the Wilson Rockwell Hardness Tester is employed to insure uniform and correct hardness in every camshaft. Its importance cannot be over emphasized as the success or failure of a racing camshaft is totally dependent upon proper hardness.Many cam grinding companies actually "work in the dark" because they do not have this instrumentation and are never really sure of the hardness factor in their camshafts. No other camshafts can compare to those of ISKY, where inspection is an important priority.

Over 45 years ago, Ed Iskenderian realized that to produce the world's finest racing camshafts required not only the finest Norton cam grinders,but the finest camshaft inspection machines as well. Combining the accuracy of the Vinco master optical dividing head with the technological advancement of the Adcole guarantees accuracy of plus or minus one second of ARC (1/3600of one degree). It allows ISKY technicians to inspect a cam profile to within 10 millionths of an inch. 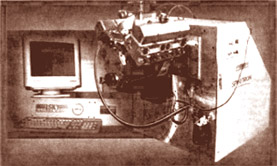 The demands of Endurance Racing today are such that every manufacturer of critical engine components,(not their customers), should be testing them on a regular basis to guard against the possibility, however remote, of catastrophic failure. This point was brought home recently when a well-known east coast valve manufacturer initiated a massive recall of defective heavy-duty stainless steel valves, after their stems began "snapping off" at the keeper groove. The manufacturer's reputation, already suffering from prior embarassments concerning connecting rod failures,was eroded even further over this unfortunate incident. The lesson to be learned here is that this could have all been avoided had this manufacturer of engine components considered testing to be as important a priority as their advertising campaigns.

We at Isky Racing Cams do recognize the absolute neccesity to regularly test critical engine components such as our Endurance Valve Springs and Roller Lifters. That's why we created the most rigorous realworld endurance test ever established, the grueling Spintron® 1,000 Racing Mile Endurance Test Standard™. The first and only one of its kind in the industry, it's a test with a "Zero" Failure Tolerance, because its either pass or fail for our Racing Valve Springs & Roller Lifters-there is no gray area in between! If they don't measure up,we won't sell them-period! We have to,because we know you're depending on the lskenderian family name to deliver the absolute maximum endurance possible in all of our valve train components. Your peace of mind and continued customer loyalty are of primary importance to us and you may rest assured we will never "cut corners" in our efforts to bring you the World's Finest Endurance Racing Valve Springs and Roller Lifters. Our reputation rides with every set!