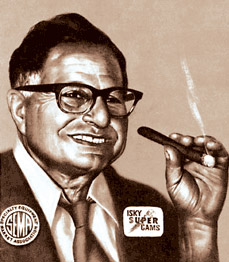 The name Ed Iskenderian is a legend among racers worldwide. Ed's life history parallels the proverbial success story. He was born in 1921 in the grapevine country of Tulare County, California. His future as a winemaker never materialized because several heavy frosts destroyed the vineyards. These conditions forced the Iskenderian family to move to Los Angeles.

While attending Polytechnic High School in Los Angeles, Ed's pet project was building a Model T Ford roadster. Ed learned the fundamentals of mechanics by working with the Model T Fords and later adapted the overhead conversion by Frontenac (more commonly known as Fronty), as well as the George Riley head known to the racers in those days as the "multi-flathead."

Experiencing repeated crankshaft failure, Ed began searching for an engine with a stronger lower end. He examined the Ford Model A and B and found them to be only slightly stronger than the Model T. Turning his attention toward the later Ford V-8 flathead engine, he found the crank to be much more rugged with larger bearings and a counter balanced crankshaft. He installed special Maxi "F" type cylinder heads (with overhead exhaust valves) and slingshot intake manifold. Ed had the combustion chambers in the heads cast iron filled and he then re-contoured the combustion chambers as advised by his good friend Ed Winfield. The actual compression ratio turned out to be a whopping 13:1, an extremely high ratio for the early days of hot rodding. This was Ed Iskenderian's first hot rod and it still occupies a corner of his plant today.

After graduating, Ed obtained mechanical experience working as an apprentice tool and die maker. This is where Ed developed the skill and experience of always striving for quality and perfection. His career was interrupted by WWII. Because of his interest in speed, Ed decided to try his hand with an even faster vehicle and enlisted in the Army Air Corps. He served with the Air Transport Command, repeatedly flying supplies to the islands of the Pacific. 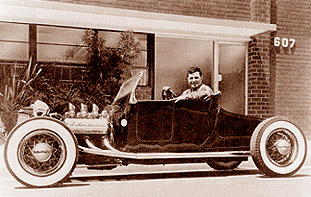 After his war time absence, Ed lost no time in getting back to his hot rod and getting it ready for California's dry lake bed meets. When rebuilding his V-8, he wanted to obtain a special camshaft. However, the boom had hit hot rodding and there was a great deal of business for the few racing camshaft manufacturers on the west coast. Their production schedules were taxed, which resulted in slow delivery. During the five month waiting period for his special camshaft, Ed decided to enter the cam grinding business. He bought a used conventional cylindrical grinder. Drawing on his tool making and mechanical experience, Ed converted it to a universal cam grinding machine. This machine produced camshafts with a noticeable improvement in performance over the conventional racing Ford camshafts. Ed's cams were the first to produce 1 HP. per Cu. In. on gasoline in postwar OHV V-8 Dodge Hemi's and 1.3 H.P. per Cu. In. on gasoline in postwar OHV 283 Chevy V-8's.

Ed saw that racers could benefit from the advancement of higher-technology in racing so he created the first Hard- Face Overlay camshafts in the industry and became the first to employ computers in camshaft design. With the computer, Ed created the most advanced cam-profiles of the late 1950s and early 60s like the famous 5-Cycle and Polydyne Profile 505 Magnum's along with the very first Hydraulic racing camshafts in the industry. Not stopping here, Ed knew that these new camshafts needed equally technologically advanced components -- So, he developed the first High-Density Chilled-Iron lifters for the ever growing Fuel Burning Supercharged Dragster class (now known as Top Fuel Dragsters), the first drop-in self locking roller tappets and the first Anti-Pump-Up hydraulic lifters enabling Hydraulic camshafts to produce higher R.P.M. This created a new challenge. As the new camshafts were delivering greater lifts and durations for higher R.P.M., the resulting higher lift rates required advanced valve spring designs. Recognizing this, Ed then introduced to the racing industry the first Vasco Jet 1000 Valve Springs after having pioneered the first valve spring assemblies for racing a decade before. New Cams and Components were not the only thing Ed brought to the young Drag Racing programs. Under a gentlemen's agreement, Ed Iskenderian and a young racer from Florida named Don Garlits entered into the first corporate sponsorship of a race operation. During this time Ed was given the nickname of Isky the "Camfather".

In addition to the numerous racing advancements, Ed also turned his interest to helping the stock/street enthusiasts. He offered, among many other things, the first coordinated cam and assembly kit to take the guess work out of ordering. To help fine tune racers' engines he offered the first "Ultra Rev-Kits" for small block Chevy V-8 roller cams and the first anti-cam walk kit for the Chevy V-8s, along with the first offset cam keys and bushings for adjusting cam timing. In 1963, Ed in collaboration with a few other industry pioneers, created the "Speed Equipment Manufacturers Association", now known as the "Specialty Equipment Market Association" or "SEMA". Ed presided as its first president in 1963 and 1964 and led the group through its first crucial years.

With the advent of the new small cars and the consumers trend towards economy, Ed turned his efforts to enlarging his line of economy camshafts and components, creating a camshaft that would deliver economy without robbing performance. This led to the newest and strongest line of street/performance camshafts. The SuperCams for economy/performance and the MegaCams, the maximum in street/performance hydraulic camshafts. Ed, although still overseeing the entire operation, has recently turned the reins over to his sons Ron and Richard who have continued their father's traditions. In the last three years, Ron has developed over 100 new cam profiles using a new computer design program which he developed to cut the design time by more than 3/4. In collaboration with his brother Richard, they have designed over a dozen new valve spring combinations for oval track and drag racing (blown alcohol and top fuel classes). Richard is personally present at many major and local tracks, conventions, and seminars to talk with the racers, engine builders and owners in order to keep an eye on the everchanging needs of a growing industry. In addition, Isky who created the first manufacturers' cash contingency awards for drag racing in the 1950s, is involved with major and minor sponsorships as well as a growing support of local tracks to give many racers a chance to race in their home towns.

One of Eds proudest achievements came in 1985 when he was inducted as a member of Chevrolet's "Legends of Performance", an honorary group of "Men whose visions, skill and perseverance have reshaped the automobile into something more than just transportation. Men who have elevated motorsports and high performance to the levels of prominence they enjoy today," quoting Chevrolet. Also in the same year, Ed was inducted into the SEMA hall of Fame, making Isky the only Cam Manufacturer to be honored by both organizations.

Isky's present location in Gardena, California consists of a four-building complex of over 75,000 squre feet on property a full city block long. Isky employs over 100 specialists, including engineers and technical advisers to assist the thousands of Isky dealers throughout the world and the hundreds of thousands of Isky customers. To answer the many questions that come in daily from enthusiasts of circle track, off road, drag racing, Bonneville, truck and tractor pullers, monster trucks, street, and stock cars and boats, Ed has written many helpful pamphlets for technical advice on cam installations including installing, valve timing, cam degreeing, dyno tuning, preventing roller cam walk and top tuning tips. Most of these are included in this catalog.

As the world's largest racing, performance, and economy cam manufacturer, Isky maintains a dynamometer testing program for constant improvement of camshaft and valve train design. These tests are conducted daily in Isky's new enlarged dyno facility. To properly evaluate and prove the efficiency of Isky racing cams and valve train components, Isky maintains a continuous engine testing program. Still another dynamometer is used exclusively for the purpose of testing the endurance of racing valve gear components in today's OHV engines. The final phase of testing is accomplished when the newly dyno tested cams and components are coordinated with the best stock and performance equipment into racing cars and boats as well as performance and stock street machines. The testing is completed under actual racing and street conditions that our customers may encounter. This assures the consumer of accuracy and quality control unparalleled in the industry. The results of these tests are available to all hot rodders, racers, and engine builders in the form of horsepower charts, plus information on carburetion, jetting, ignition, timing, and exhausts. These are just a few of the many ways Isky's research is shared with the racing enthusiasts.

At Isky Racing Cams you can always count on helpful, courteous service, the highest quality materials in all our products, the newest advancements and the finest workmanship available.